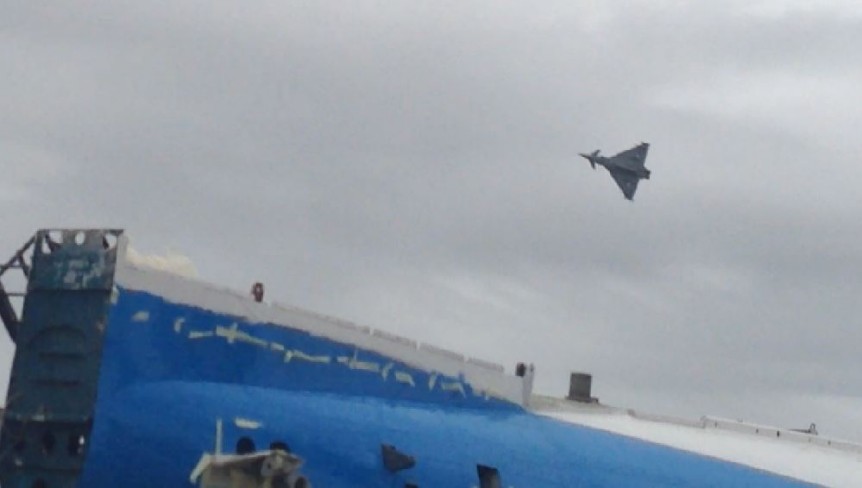 This video and the memories that go with it will stay with me forever.

I still remember fondly a similar experience years ago in a summer job as a drivers mate we passed an RAF base while several jets were preparing to take off about 100 meters away. We pulled over and watched each get into position, fire up its engines and disappear from view with a truly thunderous roar in just a few seconds. It was truly breathtaking
And a little unnerving even at one hundred metres away.

An experience of a lifetime but not for my little one

For me it was an experience of a lifetime but sadly for my little one the Typhoon was the first fly by because while it was the best it was also the noisiest and most intimidating se he cried. It’s such a shame because I absolutely love the deep roar of a jet in flight but I understand he’s too young for it yet.

This typhoon display really went on too so I loved every minute but unfortunately he didn’t. If you aren’t familiar with planes then the general rule is that jets are noisier than propeller aircraft and anything military is super loud. The typhoon is the latest all purpose fighter built by a bunch of countries in Europe and each one costs several million and all this means crazy bit and powerful jet engines that are so loud your dead gran would get a fright.

What it can do in the air is mind blowing and I got some video of it. I only hope it turned out well.

So for a really wee one it scared the willies out of him and my wife and I cursed ourselves for forgetting his ear defenders. So thats the first note to self, Leave the ear defenders in the car and not at home. The car is the best place because we never go anywhere that the little one needs them without using the car. Doh. #facepalm

So unfortunately that scared him enough that he wanted to go back to the car and watch from there. The same happened at Santa pod for fireworks night so we’ve been there before and he and mummy were happy watching it all from a distance.

So, if you’re going to do an air show with a little one then don’t forget the ear defenders if your little one needs them.

The shame is that he would have absolutely loved the rest of it. He had already been having a great time up to that point because there was plenty to do. Lots of stalls were around for him to find stuff to buy but they wouldn’t be there normally. The museum and grounds itself are still fantastic on their own I could easily go back time after time just to be around such epic history and craft.